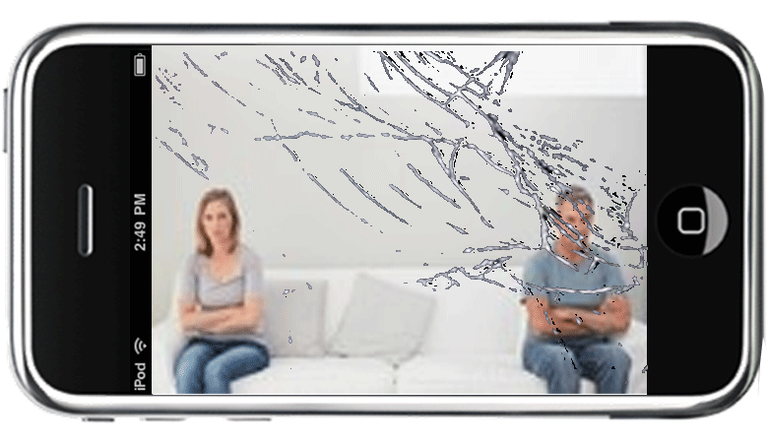 JoAnn likes dark. She has eyes like a cat. I don’t. I can’t see well without good light. So that morning when I reached for the light switch, there was no way I’d have seen the rechargeable flashlight precariously balanced on the towel rack just below the light switch. It fell but didn’t break. Later that morning, JoAnn showed me the cracked screen on her iPhone, which, it turns out, broke the fall of the flashlight.

She was angry. To her very reasonable way of thinking, I destroyed her iPhone. This triggered a deep wound she has around people not respecting her things (e.g., when she was three, her brother performed oral surgery on her favorite doll).

To my way of thinking, I walked into a Rube Goldberg-styled booby trap she’d set. Of course I was sorry about her iPhone, and offered to share the ridiculously high cost of replacing the screen. But JoAnn wanted more. She wanted an apology. And maybe something more.

Enter one of my biggest triggers. Having been raised by a caustic, manic depressive stepmother, my father regularly had me apologize to her for upsets she created. “It’s not fair!” is an unconscious mantra of mine.

JoAnn and I were in a standoff that started with both of us screaming at each other and escalated to the point where neither of us was willing to talk to the other. For three days!

Normally, one of us, typically me (I’m very well trained; plus I have deep compassion for JoAnn having survived some unbelievable trauma), would “get off it” and make the peace. But I wasn’t having any. I was as angry as I knew how to be.

Thanks to my experience with Pathwork, I spent a lot of time feeling (and not resisting) my anger. I actually got off on it. I even convinced myself that I could live a long time, with JoAnn, not speaking to each other, and just both being really, really angry. But I also knew I was working on some deep-seated anger issues.

It’s a strange thing that happens when you get that upset. You reduce the other to the enemy. Every wonderful, amazing thing I love about JoAnn was gone. I created a true polemic – just collecting and piling on every negative thing I could about her. All her beauty (and she is a spectacularly beautiful woman), was out the window; I could see only a cold, angry, barely human person.

I know she felt the same about me. I know she thought of every bad thing I’d done over the past 10 years of our partnership, and none of the good things. This scared me and reactivated my abandonment issues. I felt like a defendant in the courtroom. The plaintiff’s attorney gave his opening arguments against me, and the judge said, “That’s really heinous. I don’t need to hear any more. Guilty as charged!”

It wasn’t fair! I thought to myself, this is it. She’s never coming back.

JoAnn and I have shared such a rich, challenging, but, on balance, truly wonderful relationship. We had a rough first four years, while I (at age 50!) was learning about what true devotion and commitment were. But the last six years have been miraculous. I am totally in love with this woman, even though I’d once convinced myself that no one could maintain being truly in love beyond a few months, or maybe a year or two.

Why it took so long to resolve the flashlight upset, I don’t fully know; sometimes it takes as long as it takes. Eventually, we both went inside for the answer. JoAnn was able to work on some early traumatic issues and so was I. On balance, the experience, while uncomfortable as hell, was curative. As a healed broken bone will often be stronger than before, she and I are now stronger – both individually and as a couple.

I realized the answer is never outside. I can take responsibility for every single upset we’ve had in the past 10 years and so can she. I’ve learned that when I’m in an upset that feels like it’s totally on my partner, I can rest assured that there is always at least a germ of something that I contributed, and may be continuing to contribute. A fire like that cannot burn unless both people are fueling it.

I’m learning to not be so quick to try to put the fire out. A good burn in the woods helps the long-term growth of the forest. I can allow myself to feel the heat. I can use the fire to put a light on my past. I can tie my current upset to the past and see what work there is to do on myself. Great love, joy and wonder are all around if I train my eyes to see it.

To install tap and choose
Add to Home Screen

Add Pittsburgh Pathwork to your Homescreen!